Made with love
Too much love! Wait a second! 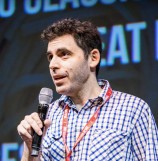 Jacob started programming in 2006. He spends most of his time writing Javascript, HTML and CSS. He has authored 2 books on Swift. He has a degree in piano performance and plays classical concerts frequently.

Jacob started at GitLab in 2015 as the first frontend engineer. He went on to lead the frontend team, UX team, and build a data science GitLab startup: Meltano. He has touched almost every part of GitLab in his time there. He came up with the idea for the WebIDE and created the first prototype among other things.

Jacob Schatz works at Mural as the Engineering Director of Platform.

Jacob also speaks at conferences. He has spoken all over the world about VueJS.

There are 5 secret easter eggs on this site.